skip to main | skip to sidebar

The Small Woman by Alan Burgess 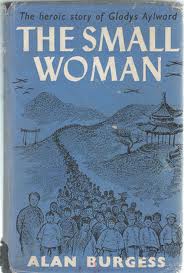 My 12-year old daughter, Rebecca, gives this synopsis of a marvelous biography she finished today:

Gladys Aylward wanted to be a Christian missionary in China (in the 1930's). She wanted to go so badly that she got a job as a parlor maid, even though she hated doing so. She opened an account at the train station to save money for a train ticket across Europe, through Russia, and finally to China. She took a boat, trains, buses and mules and finally got to Yangcheng. She stayed with Mrs. Jeannie Lawson who was a former missionary but loved China so much she got married there, had children there, and stayed there the rest of her life. Together with a Chinese cook, Yang, Gladys and Jeannie started the Inn of the Eighth Happiness. She became very good friends with a Mandarin who appointed her to be official foot inspector. She also adopted 5 children, but she took in many others. They all called her "Ai-wei-deh" which means "The Virtuous One." She stayed there until the Japanese came and bombed Yangcheng. She fled into the mountains with a hundred children to help them escape to Sian. She had almost no money and a little millet to eat. Their arduous journey was miraculous. She got very ill from her journey and never fully recovered.

Rebecca loved this book "because she had such a strong spirit, and believed so firmly and had such a lot of faith, and she...was a natural leader. She just helped out SO many people. It was just amazing. Even when she was ill, she helped the lepers. The fact that she could take care of 100 children saying "Are we there yet?" and "I'm so hungry" was amazing. Really moving."

This book was made into a beautiful movie starring Ingrid Bergman. It has some violent parts in it that I wouldn't recommend for young children. As usual, if you are choosing one over the other, the book is very much worth reading! 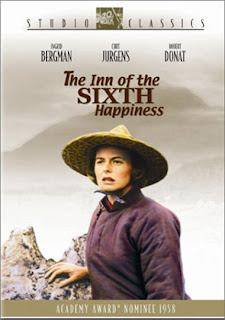 About Out of the Best Books

Around 1994, my friend, Sara, and I started a book club with this same title. The name comes from the verse of scripture that reads, "...Seek ye out of the best books words of wisdom; seek learning, even by study and also by faith." With 7 children under the age of 18, my life feels too full for book clubs right now. But I still love books and have always wanted to read only the best. Many of you want the same for you and for your children. This blog is for you! I have invited some of my dear family and friends to join with me in finding and sharing the books we claim to be "the best."

How "Out of the Best Books" Works

Keeping in mind that the purpose of this blog is not to review every book we have read, but rather to highlight the very best ones: those books that edify, that inspire you to be better in some way. These books easily fall into the description given by Paul and reiterated by Joseph Smith, Jr.: "honest, true, chaste, benevolent, virtuous, and in doing good to all men" (Article of Faith 13). Invited authors add books or comment on books that have already been added. Comments might include: why you loved this book, a favorite quote from this book, what you thought made this book great, or possibly flags you might raise about a part that concerned you or might concern others, respecting the depth and diversity of feeling towards various subject matter.

You may have tangible wealth untold;
Caskets of jewels and coffers of gold.
Richer than I you can never be--
I had a Mother who read to me.
-Strickland Gillilan
(The Best Loved Poems of the American People, sel. Hazel Felleman [1936], 376.)

The Book of Mormon, Another Testament of Jesus Christ

A late starter with books, [Robert Frost] was fourteen before he began to read on his own, for his mother had always read to him....He wrote his first poem in his fifteenth year.
Louis Untermeyer, The Road Not Taken: A selection of Robert Frost's poems. New York: Henry Holt and Co., 1971
The age range in which a child learns to read is so broad, that we can always continue to practice patience with a child who does not learn quickly and foster a nurturing atmosphere for enjoying books.

I have a dream

One of my dreams is to create a website that has wonderful, illustrated children's stories on it that children anywhere in the world can access and read for FREE.
Already, you can go to The Friend magazine online and to Google Books to read complete books and magazines for free!

Do you have a suggestion, question or comment? Email Liz at lizzie.abi@gmail.com. Thanks!